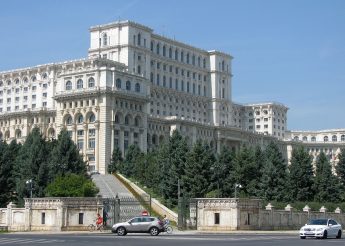 H5 Strategies Specialist Media Trainer Hal Foster has published an editorial with Adevarul, the leading daily newspaper and online platform in Romania, on his experiences living and working in Romania’s capital of Bucharest.

It was a busy lunchtime at the Express open-air cafe near the subway stop close to the Promenade Shopping Center.

The diners were getting their fill of the hearty, inexpensive food that the Express dishes up.

Between and under the tables, homeless kitties were searching for scraps of meat that had fallen on the floor and, if they found none, looking up at the diners with beseeching eyes. Express regulars are used to the cats, which they ignore or feed, depending on their inclination that day.

I live near the restaurant. I like the home-style food, the rank-and-file office crowd that eats there, and the price — typically 25 lei for a meal and drink. So I eat there two or three times a week.

I was nearly finished with my beef stew and mashed potatoes when I noticed a boy arrive. Rather than entering through the door, he stepped up onto the low platform that the tables sit on from the outside.

In a flash he had jumped into a table next to me and was wolfing down a pile of French fries that previous diners had failed to finish. As he did, he looked from side to side furtively, as if worried that the restaurant staff would run him off.

He needn’t have worried. The Express staff is a kind group. The older women who were clearing tables saw what he was doing, and let him be.

I began wondering about the boy, who was about 9 or 10. He had a deep tan, as if he were homeless or perhaps a farm kid who worked out in the sun a lot.

His clothes were cheap, but not in tatters. And he had a baseball cap on his head, turned around, with the bill on the back of his head — the way American kids who want to be cool wear it.

Within a minute to two, a slender young diner in his late 20s or early 30s walked up to the boy with a gentle smile.

He said something to the child, who seemed taken aback, then led him to the cafeteria line.

I watched as the young man, who wore a white T-shirt, jeans, and glasses, explained to the boy what the different dishes were, and asked him to get what he wanted.

I don’t speak Romanian, so I didn’t understand what he was saying, but I didn’t need to. I could see what was unfolding.

The young man made sure the boy had a heaping plate of food and a drink, then walked him over to an empty table, sat him down, and told him that if he needed anything else, to ask.

Then the man sat down and finished his own meal.

The boy was about halfway through his food when the young man walked over to him and asked him if everything was all right.

At that point, the young man began walking away.

I wondered who he was. He could be doing manual work, like warehousing, I thought. Or he could be a computer guy. A lot of techies wear a casual shirt and jeans to work, even if they’re making good money.

But my guess is that he wasn’t a techie, so he wasn’t making a lot. Which made what he did all the more generous.

I wasn’t sure if I should tell him that his kindness was appreciated.

Maybe I should keep my mouth shut, I thought — I might embarrass him.

But then I decided that someone needed to recognize his good deed.

I stood up, and in English said quietly, “Thank you very much for what you just did for that boy. You’re a good man.”

He stopped, looked directly into my eyes, put his hands together in front of him in the prayer position that the Thais use, and bowed his head toward me a little.

And then he was gone.

Five minutes later, the boy had finished his meal and disappeared as well.

As a journalist, I’ve been to dozens of countries. I’ve never seen anyone in any other country buy a meal in a restaurant for a down-and-out, hungry kid.

What the young man did told me something about Romanians.

And as I walked home, my step was a little sprightlier.

Hal Foster is a former journalist at the Los Angeles Times and other top news organizations in the United States and Japan. He is a specialist media trainer at H5 Strategies.