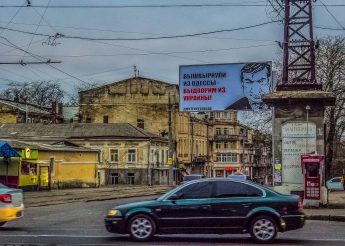 H5 Strategies Specialist Media Trainer Hal Foster has published an editorial with Adevarul, the leading daily newspaper and online platform in Romania, on his lifelong work to help journalists in dangerous situations, and his most recent effort to assist a young Kazakh research assistant in need in Ukraine.

Being a journalist is a dangerous profession.

And it has become more so in the past two decades with the rise of authoritarian governments and criminal gangs that want to do their dirty work out of the public eye.

The Brussels-based International Federation of Journalists says 81 journalists were killed worldwide in 2017. This was lower than the 93 in 2016, but hundreds of other journalists were attacked for their work, some severely, and the number of journalists imprisoned on trumped-up charges reached a record 262, according to the New York-based Committee to Protect Journalists.

Given the constant threat of intimidation and violence that journalists face, I’ve long believed we need to stick together. I consider real journalists — those seeking to tell the truth, as opposed to propagandists — to be brothers and sisters. When one is in trouble, I will help them if I can.

Until a couple of days ago, all of those I’ve helped were journalists from the former Soviet Union and the Balkans whom I had met in person. They included a woman who had acid thrown in her face for writing about corruption in her city, a man who ended up being killed in a hail of gunfire in the stairwell of his apartment building for writing about national-level corruption, and a man who had his legs blown off by a car bomb for simply suggesting that the warring sides in his country ought to try to make peace.

My most recent attempt to help journalists was not because of a personal encounter, however, but came through the unusual route of a LinkedIn message from a stranger.

The messenger, Kanykei Tursunbaeva, is a research assistant at a martial arts institute in Odessa, Ukraine, who also writes for a German publication called the “World of Martial Arts.”

Upset over the beating in Odessa of three journalist friends, she wanted to let the world know about this atrocity, so that something might be done about it. She typed the words “protect journalists” in LinkedIn’s search function, hoping it would generate the names of someone who could help. Mine was the first to show up.

Kanykei wrote me about what happened, and asked if I could help. I agreed. I’ll be writing about the attack for English-language publications. I also notified Brian Bonner, the courageous editor of the English-language Kyiv Post, which covers Ukrainian corruption and other outrages, including attacks on journalists.

In addition, I’m sending a letter about the beatings to the Committee to Protect Journalists, which publicizes attacks on journalists and puts pressure on law enforcement and government officials to identify and prosecute the perpetrators.

Here’s what happened in Odessa, according to Kanykei:

A law firm had a contract with the city to use a vacant lot for parking for its employees and clients. But a city official wanted the lot for his own purposes, local journalists said.

What happened next showed why Odessa is known as a mafia city. A squad of goons known as the Municipal Guard, who work for top city officials, descended on the vacant lot twice in two days to try to dismantle four metal barriers that the law firm erected to ensure that only employees and clients could use the lot for parking.

Odessa’s mayor, Gennadiy Trukhanov, to whom the guard ultimately reports, has a reputation in Ukraine and internationally as one of the country’s most corrupt officials.

Ukraine’s anti-corruption bureau has charged him with embezzling federal money that should have gone to road and airport projects in the city. Those charges are pending.

And British officials allege that he has purchased property there to launder money that he made by illegal means in Ukraine.

The next day the Municipal Guard showed up again. This time there were no security guards to counter them. Law firm employees objected to the renewed attempts to dismantle the parking-lot barriers, yelling at the Municipal Guard, and some began filming the guard’s efforts to do so.

Journalists also filmed the confrontation, and took notes. The Municipal Guard attacked them with batons and tear gas. One, Miroslav Bekchiv of the “Obshestvennyi Priboi” newspaper, suffered a fractured skull. Also beaten were Vitaly Tkachenko of “Obshestvennyi Priboi” and Constantine Slobodyanyuk of the “Unsolved Crimes” newspaper. Here’s a video that captures the savagery of the attack on the journalists: http://zlochiny.com/en/k2/jr/item/407-the-editor-in-chief-of-unsolved-crimes-newspaper-has-been-attacked.html.

At one point, two Municipal Guardsmen held Bekchiv while another sprayed tear gas from a small aerosol container in his face at point-blank range. Here’s a video of that: https://youtu.be/VL0ZCv4YKKw.

Law firm employees, journalists and others called city police several times as the confrontation was unfolding. By the time police finally showed, the Municipal Guard had succeeded in dismantling the parking-lot barriers.

When a City Council member offered to lead an investigation into whether the Municipal Guard’s attacks on the law firm employees and journalists were illegal and should be prosecuted, the other council members voted him down.

Do I expect prosecutors to bring charges on their own against the Municipal Guard members who beat up the law-firm employees and journalists? No. After all, the mayor of Odessa, Trukhanov, and other city officials control the guard, the police and the prosecutors.

None of those who attacked the other journalists that I helped in the former Soviet Union and the Balkans has ever been prosecuted. That’s because the perpetrators work for the people the journalists crossed.

In my experience, publicity is the only thing that leads to malevolent officials at the national or local level backing off on ordering attacks on journalists.

That’s why I join other journalists and journalism organizations in helping to publicize these attacks where possible. Not doing so means that the toll of injured and killed journalists will likely be even higher.

News accounts about government officials’ wrongdoing are one of the only counterweights against it.  When journalists expose corruption, they are looking out for the people — and most citizens admire them for this.

But those who become filthy rich from corruption fight back when they see their lavish lifestyles and power threatened. And they couldn’t care less if journalists are killed or maimed when the fight is joined.

In many ways, trying to protect journalists is a losing battle. But giving up would be surrendering to the bad guys. So I’ll continue working with other free-press defenders to try to help. With the world so full of tyrants these days, it needs courageous journalists more than ever.

Hal Foster is a former journalist at the Los Angeles Times and other top news organizations in the United States and Japan. He is a specialist media trainer at H5 Strategies.