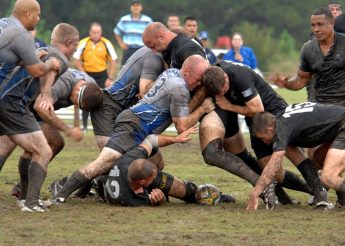 A Wake-Up Call That — If Heeded — Can Revive Romanian Rugby

H5 Strategies Senior International Vice President Tony Pisaroglu has published an editorial today with Romania’s leading daily newspaper and online platform, Adevarul, on why the recent scandal involving the Romanian Rugby Federation is a wake-up call that must urgently be heeded. Right now, he writes, the future of the sport in Romania very much hangs in the balance.

A Wake-Up Call That — If Heeded — Can Revive Romanian Rugby

You don’t need to be an amateur or professional rugby player, or even a fan, to be disheartened by the Romanian national team being disqualified for the World Cup in Japan in 2019.

Even Romanians who don’t understand much about the sport have taken pride in their team ranking as high as 11th in the world some years.

So it was a sad and shocking day for many when the news surfaced this May that the team would be unable to compete in the World Cup after qualifying for all seven previous tournaments.

The reason was because the Romanian Rugby Federation’s management failed to make sure that a Tongan player they had recruited was eligible to play for the national team. The International Rugby Federation decided that Romania could not compete in the World Cup because he was ineligible — since he had played for the Tongan national team before.

Management contends that it wasn’t asleep at the switch — that it did look into whether he was eligible. But it obviously bungled that drill.

This major blunder, as well as management’s failure to take responsibility for what happened by vacating their posts, highlights a continuing problem in sports management in Romania and throughout Central Europe. The Romanian Rugby Federation has failed to shake a post-Communist legacy of mismanagement, cronyism, misplaced priorities, and ignoring the crying need to modernize infrastructure.

As a former player, I know the thrill of competing in World Cups. And although my heart goes out to the players and coaches who won’t get to go to Japan, my main emotion right now is not the empathy I feel toward them but the anger I feel toward those who cost them so much.

I get particularly rattled when I think of the players who are nearing the end of their careers. This would have been the last World Cup for several of them. Now their chance for glory and memories has evaporated.

What happened to these courageous athletes, who time and again leave everything they have out on the field to try to honor their homeland, was nothing less than a disaster. But like all disasters, this one presents an opportunity — if only the Romanian Rugby Federation is bold enough to act on it.

As a first priority, the federation needs to install a new generation of leaders to replace the old-timers who continue to hamper the development of Romanian rugby. And this needs to happen immediately. We need management with fresh thinking, a grasp of international best-practices in business and sport, professionalism rather than cronyism, and an ability to adapt to changes in the game.

The days when our rugby athletes’ physical prowess was enough for us to become a global contender are gone.

In addition to younger leaders with fresh ideas, the federation needs to make a more concerted effort to develop home-grown players, starting at a very early age.

I understand that it is standard these days for national teams to bring in talented players from abroad.

The justification is that top imported players give a team immediate punch that they would not have had. But this is often done at the cost of failing to develop home-grown talent.

I have Romanian friends who love baseball.

Some Major League Baseball teams in the United States pay huge prices to poach talent from other teams. Others use a home-grown model — developing players in their minor league systems.

Both approaches have produced winners. But critics of the shopping-for-talent model contend that it amounts to buying championships. Not only is the home-grown model the most satisfying, but it is the one that fans like the most. And its backers say it is the longest-lasting.

One thing I appreciate about the home-grown model is that it offers a chance for success to poor kids from areas far from Bucharest and other cities. I was one of them, growing up in Tecuci. I will always be grateful that rugby put me on a path that changed my life.

This means convincing people with means that they need to support the game — and not just on a one-off basis, but consistently, over time.

It will take energy, professionalism and patience to attract and retain such benefactors, but it can be done.

This is why it is so important for the federation to have young leaders with a solid background in international business development. They need to be able to use the best practices from around the world to come up with a plan that attracts and retains partners and benefactors.

A new generation of management will also know how to get out the message that the federation is determined to transform itself into a more modern, nimbler and more responsive organization — changes that will help Romanian rugby compete better in Europe and the world.

Many of today’s rugby players understand how important business development, game analytics, strategic communications and other modern tools are to the success of today’s sports franchises — and would be only too eager to see them applied in Romania.

The Romanian Rugby Federation needs to adopt such approaches.

Everyone agrees that the team’s disqualification from the 2019 World Cup was tragic and  disconcerting.

But salvaging and retrofitting the sunken ship can lead to a new era in Romania’s contributions to the sport.

All that is needed is for the Romanian Rugby Federation to seize the moment.