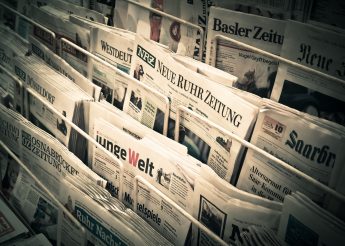 Fake news has been around forever.

Shakespeare’s protagonist Othello killed his wife Desdemona because he believed his military aide Iago’s lies that Desdemona had been unfaithful.

Fake news attempts to undermine Viktor Yushchenko during the Ukrainian presidential election of 2004 were so blatant that they backfired on his rival, Viktor Yanukovich.

During the campaign, Yushchenko fell ill with what Swiss doctors determined was dioxin poisoning, which disfigured his face. Yanukovich’s forces painted the disfigurement as Yushchenko contracting a venereal disease or having cosmetic surgery that went awry. Many Ukrainians were so outraged by these vicious attempts to tar the victim that they gave Yushchenko a large sympathy vote.

A key difference between the fake news in the Ukrainian election 14 years ago and what we see today is that it is no longer obvious and no longer clumsy.

A key problem is that millions of people don’t recognize that it’s fake, and are making political decisions on the basis of false premises.

When fake news reaches the point that it can affect the outcomes of elections, it becomes a threat to democracy. A concerted effort needs to be made to neuter it to protect democratic institutions.

Our communications company, H5 Strategies, has decided to do its part by helping to open anti-fake-news centers in Central and Eastern Europe, and beyond.

The first will be in Chisinau, Moldova, and the second in Bucharest.

H5 will not own or manage the centers. We will encourage prominent individuals, non-profits and others to open them, then support them with expert advice, donated resources and manpower.

A well-known Moldovan free press advocate and media entrepreneur is spearheading the Chisinau center initiative. Former journalists and media trainers at H5 will support the work of the center, which will open next month.

While most people associate fake news with politics, it can sow confusion and cause harm in education, health care, social services, relations among groups in society, and many other fields.

So the centers will be working to identify and counter both political and non-political fake news.

To lend the centers the best support we can, our staff has been researching what governments, universities, think tanks and other organizations around the world have been doing to counter fake news.

A good sign is that these efforts are beginning to pick up steam. But none that we’ve identified so far is a cure for fake news.

Progress against this scourge may be piecemeal for awhile. Our hope is that the centers we support will come up with important pieces to reduce the threat.

As we and others work to counter fake news, we would call on all citizens to learn as much as they can about the problem. The more everyone in society knows about the threat, the better chance we have of neutralizing it.

Our very democracy may depend on it.