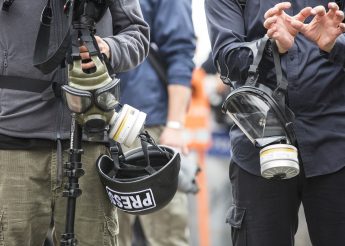 How to Stop Fake News Without Hindering Freedom of Expression

H5 Strategies Founder and CEO Marshall Comins recently published an editorial with Romania’s leading daily newspaper and online platform, Adevarul, discussing fake news as a threat to sociopolitical stability in Central and Eastern Europe, and how it can be combatted without hindering freedom of expression.

One of America’s most revered statesmen, Thomas Jefferson, once said that if he had to choose between government without newspapers, and newspapers without government, he would choose newspapers.

The third U.S. president’s message was that it is crucial to the health of a democracy that citizens stay informed. The way to make democracy work, Jefferson and other American founders believed, was for citizens to examine all sides of an issue, then choose the best.

Jefferson’s idea that newspapers — as the main medium of information in those days — were more important than government was based on the assumption that newspapers were telling the truth, however.

Jefferson would be appalled at the tidal wave of fake news that threatens democracy these days.

The question he would ask is: How can citizens select from conflicting ideas when the facts on which these opposing ideas are based are distortions, exaggerations or outright lies?

Fake news is not a problem for authoritarian governments, of course, because the misinformation plays into their hands. It keeps their citizens ill-informed and off-balance, so they pose no threat.

In fact, much of today’s fake political news comes from authoritarian systems — although certainly not all. Dictators want to see democracy smashed so they can do their dirty work with impunity.

Fake news is such a threat to democracy now that individuals and groups in democracies, and some of the governments themselves, are trying to come up with ways to combat it.

One approach is forming anti-fake-news centers whose staffs look for bogus news, then publicize it as fake. Non-profit organizations such as foundations sponsor some of these centers. In a few cases, governments sponsor them.

Although the centers are doing some good, there is a mismatch between they resources they command and the ones that authoritarian governments align against them. Some governments hire thousands of people to generate torrents of fake news aimed at harming democracies. And these saboteurs work seven days a week.

A few democracies that feel particularly threatened by fake news have enlisted volunteers to help them identify and call out this bogus material. The volunteers are motivated by patriotism and a sense that fake news is a danger to their democracy.

Another approach that groups in democracies are using to counter fakes news is teaching citizens — and particularly children — how to identify bogus stories and the potentially harmful motivations of those propagating the fakes. As an example, the BBC has developed an anti-fake-news course that members of its staff teach in schools.

One focus of these educational efforts is the algorithms that social media companies create and continually refine to get as many hits and other indications of audience use as they can. Critics of these algorithms say they lead to users getting the same kinds of information over and over, since they are based on whether the user has shown a preference for the information before. By delivering one-sided information to a user time and again, social media companies prevent the clash of ideas important to a democracy, critics say.

Still another way that democracies are trying to stop fake news is passing laws aimed at reining it in. There’s an example right here in Romania. This country has a law that prevents people from knowing the true owner of a website. Those who championed it said their goal was to protect those who wanted to offer legitimate criticism of institutions from retaliation. But the law also prevents those who disseminate fake news from being outed, so some are calling for rescinding it.

A few countries have even passed laws that make it a criminal offense to disseminate fake news. Critics say these laws can be used to stifle free speech, however. They contend that if a news organization or blogger wants to shine a spotlight on government malfeasance, they may hesitate if they could face criminal charges under a fake-news law.

Another approach that governments are taking to combat false news is setting up anti-fake-news task forces. As an example, the European Union has established an East Stratcom task force to combat fake news aimed at Central and Eastern Europe.

It has done little to stop the problem, however. Observers say a major reason is that EU officials are worried of being accused of using the task force to stifle legitimate news, including criticism of institutions.

As you can see from these examples, democracies face a dilemma when trying to stop fake news.

Free expression has long been a strength of democracy — one that has helped prevent its excesses and improved it. Yet there is growing evidence that fake news has hurt democracies in recent years, including affecting election results.

So the question becomes: How do you clamp down on fake news — a very real threat to democracy — without harming free expression, which has long been an underpinning of democracy?

There is no easy answer to this question. But one thing is certain: Democracies need to find one as soon as possible. Nothing less than the existence of democracy is at stake.