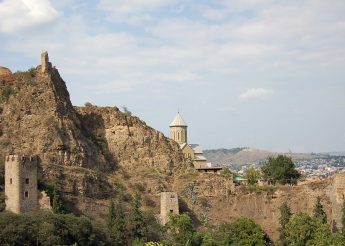 Sept. 2, 2018 (BUCHAREST, ROMANIA): A Georgian democracy activist who is an expert on disinformation will join the crisis management and strategic communications company H5 Strategies’ initiative to open anti-fake-news centers in Romania and elsewhere in the region.

Giorgi Meladze, who heads the Center for Constitutional Research at Ilia State University in Tbilisi, will be a key adviser to the centers, according to Marshall Comins, the founder of Bucharest-based H5.

Meladze is executive director of the Liberty Institute, which played a prominent role in ushering in the Rose Revolution that strengthened Georgia’s democracy in 2003. A former visiting scholar at Columbia University Law School in New York, he has also trained human rights activists globally.

Georgia did such a good job of countering Russian disinformation during their conflict in 2008 that Russia concluded that it lost the conflict’s information war.

The Russian defense and intelligence officials who arrived at that conclusion noted that the world believed Georgia’s account of the war, and sympathized with it, while viewing Russia’s account as lies and propaganda.

The setback in Georgia prompted Russia to come up a new information-war strategy that includes weaponizing fake news — that is, using the Internet to disseminate it on a massive scale worldwide 24 hours a day.

Russia employed the strategy to help decide the outcomes of Britain’s Brexit referendum and the U.S. presidential election in 2016, Western intelligence agencies contend. In the Brexit referendum, the British people voted to leave the European Union — a move that cheered Russia, which saw it as weakening the EU, its main adversary in Europe.

Meladze said part of his advisory role at the anti-fake-centers will be to share what Georgia has done to win the information war against Russia during the countries’ conflict in 2008.

“We have more than a quarter of a century of experience fighting Russian disinformation,” he said. “It began almost immediately after the break-up of the Soviet Union in the early 1990s. The Kremlin has been waging this war against us because it never wanted Georgia to be a democracy or to look toward the West.” Georgia has long expressed a desire to become part of the European Union.

“We are lucky to have the anti-disinformation expertise of Giorgi Meladze, who has spent much of his life trying to bring democracy to his homeland and then helping to defend it from threats both within and from outside of Georgia,” said Tony Pisaroglu, senior international vice president at H5 Strategies. “He will be a very valuable resource for the anti-fake-news centers.”

The first center will open in Chisinau, Moldova, in September, Comins said. The second, in Bucharest, and the third, in Tirana, Albania, are expected to open before the end of the year.

H5 Strategies came up with the anti-fake-news initiative because “fake news has become a global scourge, preventing people from knowing what the truth is in politics and many other fields,” Comins said. “It is the greatest threat to democracy in our lifetimes, and it’s urgent that something be done to minimize its influence.”

H5 will not own or manage the centers, but support them with advice and other resources, he said.

Comins said his company’s expertise in crisis management and strategic communications, along with top advisers like Meladze, should help the centers’ staff come up with solid anti-fake-news strategies.

A key to successful crisis management is learning about the rumors and half-truths that are unfairly damaging a person’s or organization’s reputation, then getting the truth out, he said.

In addition to Bucharest, H5 has a presence in Washington, London, Brussels and Abuja, Nigeria.

One reason for establishing a presence outside Romania was to help business leaders, government officials and others in Central and Eastern Europe obtain crisis-management and strategic-communications services overseas. On the flip side, the offices also help overseas organizations that want to establish a presence in this region.

H5 decided on a Brussels presence to help those who want to do business with the Brussels-based EU. It chose Abuja as the location for its Africa office because Nigeria has the continent’s largest population and its biggest economy.